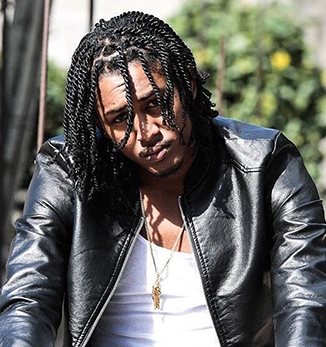 The Brand Deep Jahi has maintained consistency at the upmost level of professionalism; he has made an impact cementing his name with: uplifting, soothing, poetic music.
He is one of the perfect ambassadors for Reggae music, born as Rushane Sanderson in the parish of St. Mary.
He started writing music from as early as age fourteen (14) where he garner most of his experience from school concerts and myriad communities outings.
He rose to prominence after emerging victorious in the 2012 edition of Jamaica’s premiere dancehall music show, Magnum King and Queen of Dancehall. He then later won the J.C.D.C festival in 2014, which prompt slew of music labels into producing him.
As time passed in 2015 his place within the music industry has gradually grown with hit songs such as: “Life Goes On”, “Greatness”, “Conversation”, “Family Over All” and “Another Try “establishing him amongst the best with run of stage shows including Sting and Kite Festival.
In 2016, He created another anthem “Motivation” with YGF records, a St. Ann pioneer record producer. The Single has gained a lot of traction locally and internationally on main stream platforms. Followed by: singles from Lee Milla “Rain Glow “, “Much Less” featuring Jahmiel.
Deep Jahi continues his run of success into 2017 with a BANG!
He released “Hold On “which quickly got over 100,000 streams on youtube.
In addition to his viral single “Close Call” that instantly break the one million mark for him on social media.
Deep Jahi was rewarded two singles (Don and Hide) from prolific producer TJ Records. Deep jahi was then gifted the opportunity to make his debut on Reggae Sumfest 2017.
He then closed the year with Gt Extravaganza, where he performed a slew of hits.
2018 starts:
Reggae recording artist Deep Jahi made his Rebel Salute debut over the weekend.
Rebel Salute is one of the biggest annual reggae shows locally. Speaking on his performance, Deep Jahi said “to start a show like rebel salute it means that you have the capacity to lift the patron spirit and raise awareness to the people relative to the magnitude of rebel salute so no artiste whether opening or closing act should not be taken for granted.”
Opening at Rebel Salute means the year is off to a positive start for the reggae musician. Having started his career with positive and inspirational melodic songs and strong stage presence, Deep Jahi has targeted this year to kick his career to the next level.
He is expected to feature more prominently at more local stages as he seeks to strengthen and grow his fan base while consistently providing conscious songs for the upcoming year. Deep Jahi promises a lot for the year ahead “We have a slew of work coming out right now and we recently release a song titled prison bars, directed towards the current situation whereby both dancehall and reggae artiste have found themselves in such dire predicaments”.
As the year progresses look out for more conscious musical content from the young reggae artist. You can stay informed by subscribing to Deepjahivevo, following his fan page and Instagram page which is @Deepjahi for new music and to keep up with his musical journey @ygfrecords or Tell 1876 7723130
For Further information please contact
Ygfrecords876@gmail.com