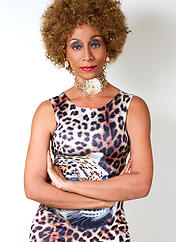 Nadine Sutherland
Born in Kingston, Jamaica, Nadine Sutherland began performing in 1979, winning the Tastee Talent Contest that year (beating Paul Blake and Yellowman). She has the distinction of being the first artist signed by Bob Marley to hisTuff Gong label, recording “Starvation on the Land” at age eleven. In 1993 she recroded her hit record “Action” in combination with Terror Fabulous which track was deemed by Vibe Magazine as one of the fifty greatest duets of all time. Ms. Sutherland also appeared on the Buju Banton remix “Wicked Dickie” which topped the charts in Jamaica.
More recently, Sutherland has appeared as a judge on the TV show “Digicel Rising Stars”, is a contrbutor to the Jamaica Observer, and has been a committee member for the charity Sisters to Sisters.
In today’s overtly sexual and over-produced music market, Nadine Sutherland makes a deliberate effort to portray a sense of style and sophistication. She is a talented female singer, who has been described as “capable, sexy and hauntingly beautiful, with uncompromising flair and intelligence”. Her roots are embedded in the very heart of Jamaican culture. Although she has already accomplished so much in her life, Nadine has no intention of slowing down.