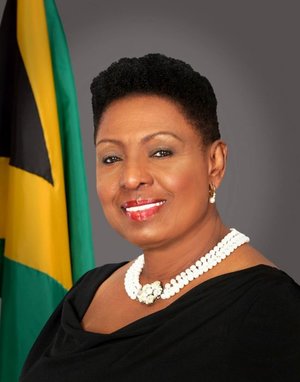 Ms. Olivia ‘Babsy’ Grange, CD, MP is one of Jamaica’s most prolific talents and campaigners – a businesswoman and social worker. She has been a Member of Parliament since 1997, representing the Constituency of Central St. Catherine and is currently the Opposition Spokesperson on Information, Sports, Culture, Entertainment and Gender Affairs. In the previous administration, she served as Minister of Information, Youth, Sports & Culture, with responsibility for Women and Gender Affairs, Entertainment, Community Development and Special Projects from 2007 to 2011.
In October 2015, Ms. Grange was conferred with the honour of the Order of Distinction, in the rank of Commander (CD) in recognition of her contribution to the Jamaican Music Industry, Cultural Development and Public Service. She also recently served as Consultant Producer for the inaugural staging of the Abi-Reggae International Music Festival and Conference held in April 2015 in Abidjan, Côte d’Ivoire, having had direct responsibility for the coordination and management of the entire Jamaican contingent.
In 1980, Ms. Grange was personally invited by former Prime Minister, the Most. Hon. Edward Seaga, to transform the various communities in West Kingston and she directed the cultural development programme for youths.
She is a Director of the Edward Seaga Research Institute and a founding member and former Director of the Jamaica Association of Composers, Authors and Publishers (JACAP). Ms. Grange has also served on boards of broadcasting entities JBC (TV and radio) and RJR as well as produced/ co-produced many of the major events in Jamaica, such as Grand Gala and Street Parade, World Music Festival and the World Youth Festival of Arts (JAMFEST).
She has long been a proponent of music, community development and a cultural activist. She co-founded Contrast, Canada’s first black community newspaper. She later managed a number of artistes including Carlene Davis and Leroy Sibbles, as well as Shabba Ranks – multiple grammy winner, Lady Patra, Bounty Killer, Cindy Breakspeare, Carol Gonzalez and was the first manager of Damian “Jr. Gong” Marley. Ms. Grange has also produced several hit recordings by various artistes, like Carlene Davis (“Like Old Friends Do”), among others.