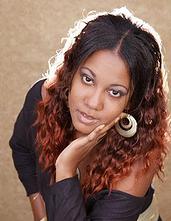 Rayven Aman former host of the cable broadcast “Yaad Beat”i is the creator of Jamaica’s Best School Band, the first inter-high school stage band competition made for television. Her first song “Wanna Be Free” was a local hit receiving favorable rotation from most of the local Jamaican radio and television stations. A rising star on the Jamaican music scene, her newest single “My Darling” is already getting rave reviews.