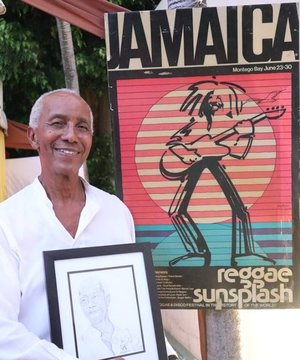 Co-founder, Reggae Sunsplash |
After years of success as an insurance sales agent, Mr. Burke decided to follow his heart into the business of music, and along with schoolmate and friend formed Micron Music, a small record production and distribution company.
Micron was the first company to distribute only with Jamaican music and quickly boasted a top rated clientele which included the sale of Marley’s “Natty Dread” album which still holds the record for album sales in Jamaica. However Micron closed in 1976 due to lack of access to funds in manufacturing.
The Reggae Sunsplash festival came to fruition from the shared belief among Mr. Burke and co-founders Tony Johnson, Don Green, John Wakeling, and Ed Barclay that the Jamaican society had no idea of the international reach and popularity of Jamaican culture; highlighted by our indigenous music — Reggae. As fate would have it, Berl Francis approached the group with a proposal from the Jamaica Tourist Board for a summer music festival to be staged during the dormant season. The rest is history.
In August 2015 Mr. Burke was awarded the Order of Distinction (OD) by the Jamaican government in recognition of his contribution to the development of Jamaican music.